I've been pondering lately, and I think I can trace almost all of America's major problems to the existence of the Space Shuttle program.  In brief, here's what I'm thinking:

In the 50's, 60's, and 70's, there was a massive influx of kids getting into science and engineering fields.  Most of them if you asked would tell you they were interested in these areas because of the excitement of the Mercury, Gemini, and Apollo missions.  Most of them would have wanted to be an astronaut but of course only very few get to do that.  But more important than leading to a mass of kids who can't be the astronauts they want to be it lead to a mass of scientists and engineers that were excited about innovation.  In the 70's, 80's, and 90's this lead to leaps and bounds forward in technological innovation that drove our economy into overdrive.  We dominated the world with our advanced technology and we prospered.

But those scientists and engineers are mostly retired now, or at least they've lost their edge with age.  Their innovative youth is long behind them.  And in the 80's and 90's the kids were no longer inspired to get into science or engineering, instead they were getting into investment banking and becoming lawyers and CEOs.  These are fields where brilliant innovation can be very dangerous, as they are areas where greed is the primary driving force.  All that furious innovative power was turned towards finding better ways to screw people out of their money, and as a result we had credit default swaps and all the other madness that crashed our economy in the past decade or so.  At the same time the death of scientific and technological innovation in America gave time for the rest of the world to catch up with us.  You no longer have to hire American workers to get your advanced technology built, you can go overseas for it where the labor is much cheaper and still have it done well because they aren't any less advanced than we are anymore.

What changed?  Why did kids lose interest in science and engineering?  I suspect it was mostly because they were no longer inspired by our space program.  There is no doubt that the Space Shuttle was a pretty descent low earth orbit science platform and it's fine for doing some more hands-on satellite work, but mostly what it was was boring.  After the first few launches there was nothing interesting to see for anyone that wasn't already into science and engineering for other reasons.  After three decades of thrilling advancement on the frontiers of space we decided to settle for a glorified orbiting Greyhound bus and we lost public interest.  And so our brightest kids were instead inspired by TV and movies, which at the time meant movies like Wall Street ("greed, for lack of a better word, is good") and The Devil's Advocate ("law is the ultimate backstage pass").

And that's how the Space Shuttle - by utterly failing to inspire an entire generation - helped cause our economic collapse and the now endemic loss of interest in science and technology by almost everyone.  The only way we can turn it around is to immediately start serious plans for manned missions to - and permanent bases on - the Moon and Mars.  Although starting with permanent stations at the L4 & L5 points would probably be a firmer foothold into space and still just as exciting and inspiring.  And if we don't do this our next wave of misery will be all the inspired kids looking to innovate in the fields of government and health insurance administration, two more fields that are probably best left uninnovated lest we further destroy ourselves.

This morning I thought of a different approach to the issue of gay marriage.  It's really an issue of Freedom of Religion.  Take for our example a devout Christian who is also a homosexual.  No doubt he or she has spent many hours debating with himself (or herself) about how his own sexuality intersects with his religious beliefs.  In the end he would have to conclude that because he has always felt this way - has always been attracted to men, even if he denied it to himself at first as he was growing up - then it must be because this is the way God has made him.  So it must be okay.  But rather than give up on Christianity, he still believes devoutly in Jehovah and wants to follow His laws as much as is humanly possible.

He could decide to suppress his true feelings and marry a woman and just be unhappy with his life.   But he knows that is not what God wants for him, as his God is a loving God and would not torture him so.  He could devote himself to a life of abstention, not pretending to be something he is not but also denying himself the love and happiness that marriage brings.  But surely God does not want that for him either.

Yet he is devout, and the only option left open to him - namely "living in sin" and having a committed relationship with someone to whom he cannot be married - is not acceptable.  He refuses to engage in pre-marital sex, and sex is an essential component to any healthy committed relationship.  His religion requires him to marry.  Yet he cannot.

There are those who say that they are not opposed to gay unions as long as we don't call it marriage.  "Separate but equal" is their proposal.  The counter to that solution is that in order to support that they have to admit that they are supporting - nay, requiring - sex between unmarried people, which is just a much of a sin that carries the same traditional punishment of stoning.  Surely it would be better to allow gay marriage, thus reducing the number of sins they will be committing by one.

Of course this argument doesn't help with the "homosexuality is a choice" crowd, but they are so amazingly brain-dead that nothing will help with them anyway.  I've tried asking them "so when did you decide to stop being turned on by those of the same sex and be strictly heterosexual, and what led you to making that choice?" but they don't understand that point at all.

This is the movie I so very very muchly wish was really going to be made.

There's something I'd like to try with one of our developmental reading and writing courses, but I need help with it.  The problem is that students these days - especially those that need the most practice reading - hate to read.  So I was thinking perhaps one approach would be to give them good writing in a format that they're most likely to already be comfortable with.  Which brings me to Twitter and Facebook.

I'm looking for a list of people on Twitter and/or Facebook that are 1) interesting and entertaining to read, 2) not too difficult to understand, and most importantly 3) regularly use proper grammar, spelling, capitalization, and punctuation.  From this I'd like to come up with a recommended reading list that can be reliably engaging and serve as a good example to these students.

I've done some digging around on Google and have some ideas, but I wanted to throw this out there to anyone still reading my LJ.  Do you have any suggestions?

If you like this idea enough to ask other people you know as well, please by all means do.  The more the merrier.

Today is Everybody Draw Muhammad Day.  It's a day to celebrate freedom of expression in the face of violent religious opposition.

I am not a good artist ... scratch that; I am a very bad artist.  So this is what you get from me on this fine day:

Upon seeing two angry drunken Canadians starting to  fight during a Canada Day celebrations, Bill of LRR went up to them to break up the fight.  How did he do it?

"I just started singing Oh, Canada and they stopped fighting."

Canadians are so adorable!

I liked the graffiti in my last entry so much, I was thinking it might make a good bumpersticker.  But I already have one similar enough that I have to pick one or the other.  So!  I need opinions.  Which of these is funnier?

"Heisenberg may or may not be my copilot."

"I may or may not brake for Schrödinger's cat."     (thanks SJO for catching my silly spelling error)

On the one hand, Schrödinger's is a funny word all on it's own.  On the other hand to those who don't get the joke it might imply I'll run over a cat.  Then again the first has some possible religious connotations that might be undesirable.

What do y'all think? 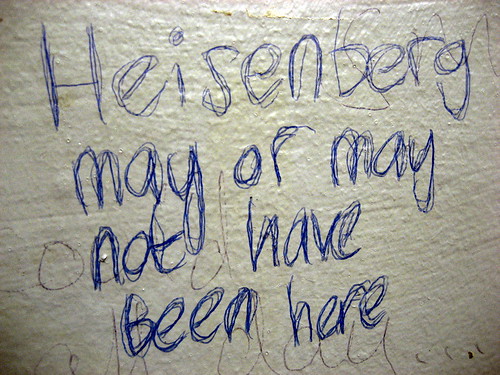 The DVD arrived today in the mail and I'm watching it at lunch.

It's so good I threw my panties at my monitor.

My car made some friends this weekend:

Note that there's about four more past the end that you can't see in this image (including mine).  We drove down to Galveston, rally-style.  There was much smiling and pointing from those we passed, and more than a few pictures taken.
Collapse